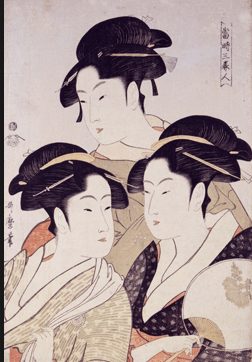 Hundreds of years ago, the Great Emperor of Japan held a wrestling tournament once a year, and the strongest and fiercest wrestlers arrived to compete for a huge pot of gold. The wrestlers were gigantic, and they often broke each other’s bones. Some were tossed out of the ring and died from the fall. Some were trampled and suffocated. The more brutal and exciting the fights were, there more the Emperor liked them. And each year he looked forward to his tournament, which lasted one week. At the end, despite the fact that many wrestlers lost their lives or were crippled for life, the Emperor was happy to crown a champion, and the champion was happy because he would have enough gold to last him the rest of his life. The champion never thought about the wrestlers he killed.

One year, Big Bear, a champion wrestler from a small island off the coast of Japan, decided to enter the tournament, and he left his home to travel to the mainland. When he arrived, he had two months to practice for the tournament, and he decided to go up into the mountains to train for the contest. When he went into the woods and began to climb a mountain, Big Bear noticed a young woman carrying a large pitcher of water on her head that she held steady with one hand. Since Big Bear was a fun-loving guy who liked to play jokes, he thought he would sneak up behind the young woman and tickle her under the arm so that the pitcher would fall. So he crept up behind the woman as quietly as he could, stretched out his hand, and said,

However, to his great surprise, the young woman brought down her elbow and squeezed his hand until it was stuck in her armpit, and she reached up with her other hand to hold the pitcher in place. Her elbow and arm were like a vice, and Big Bear could not free his hand as the young woman kept walking and dragging him along with her.

But the young woman kept walking up the mountain, dragging Big Bear along. Try as he might, he could not free himself.

“I’m warning you,” he shouted. “I don’t want to use all my strength. You could really get hurt!”

The young woman kept walking with Big Bear talking. He yanked and yanked, but his hand remained trapped.

“It was just a joke,” Big Bear said, trying to humor her. “I really didn’t mean anything by it. Can’t you take a joke?”

The young woman kept walking with big Bear talking, and he talked his way to the top of the mountain, where the young woman finally released his hand.

“White Lily,” a voice called out to the young woman from the inside of a cabin, “is that you?”

“It is me, mother, and I have brought a guest.”

Just then, a woman came out of the house carrying a stove and bathtub piled on top of one another above her head. Big Bear was amazed, and he gasped as he watched the woman carefully put the stove and bathtub down on the porch. She waved to him and said, “Just doing some spring cleaning,” as she disappeared back into the cabin.

All of a sudden, Big Bear heard another voice coming from over a hill, “White Lily, is that you?”

“It is me, grandmother, and I have brought a guest.”

Much to Big Bear’s astonishment, a tiny old woman appeared on the ridge of a hill carrying a cow in her arms. As she descended the hill, he heard the grandmother say, “The poor darling hurt its leg and I’ve decided to nurse it in the shed next to the cabin.”

The grandmother waved at White Lily and walked past her and Big Bear on her way to the shed.

“What do you mean?” White Lily replied.

“I mean, how come you’re all so strong?”

“It runs in the family,” White Lily explained. “You see, we love the mountain air up here. It calms us and gives us strength.”

“But where are the men?”

“Dead. The Emperor needed soldiers, and they were forced to fight in his wars. They lost their lives, and ever since then we have lived alone. But we are not afraid. We’ve learned to exercise and become strong. We’ve watched the animals and birds, and tonight we’ll show you what else we can do.”

Later that evening, as the sun began to set, the three women began to dance in a clearing as Big Bear watched. Then suddenly they began to wrestle with each other and toss each other high into the air. Sometimes they caught each other. Sometimes they did triple and quadruple flips. One time the grandmother flew fifty yards through the air, and White Lily caught her and gently set her down. Another time, the mother jumped back and forth over the cabin. Their wrestling was like a dream dance, and Big Bear could not believe what he was seeing.

White Lily looked at him, and Big Bear pleaded, “I want to win the Emperor’s tournament.”

“All right, but you will have to help us around the farm. We will begin lessons with grandmother, for she is the tenderest among us and will not hurt you.”

For the next two months, Big Bear helped the women on the farm and watched them carefully. He breathed the mountain air and took walks in the woods. And each night he learned the gentle art of wrestling and how he could use his power in extraordinary ways to defend himself without destroying his opponent. Wrestling became a dance of harmony. He found himself wanting to use his power in harmony with the three women.

When the time came for Big Bear to leave the mountain, he was sad, and yet he had dreamed of winning the Emperor’s tournament. So, he departed, and after arriving at the Emperor’s castle, he was immediately called upon to fight. As he entered the ring, the crowd laughed at him because Big Bear was dressed in simple brown shorts and was not as fat and ferocious as all the other wrestlers. But when the first match began, the crowd became silent, for Big Bear was so fast and quick, so agile and nimble, that the wrestling game turned into a dance, and the other wrestler found himself wanting to dance in harmony with Big Bear. At one point, Big Bear grabbed the other wrestler, who weighed at least 300 pounds, flipped him high into the air, and then caught him gently so he would not hurt himself. The crowd was enchanted, and the other wrestler smiled, bowed, and retreated from the ring. And each time a wrestler entered the ring to fight Big Bear, he ended up dancing, leaping into the air, and gracefully retreating from the ring.

In the end, Big Bear was declared champion, but the Emperor was furious. He could not stand the gentle dances. He wanted action, fierce fighters, broken bones, dead bodies. He wanted excitement and raw power.

When he gave the pot of gold to Big Bear, he told him, “Never return to my tournament. If you do, I’ll see that you will be killed!”

Big Bear took the gold, and before he left the Emperor’s court, he shared the gold with the other wrestlers. He saved three coins for himself and quickly departed for the mountain of the three women.

Some say, when the ground begins to tremble and rumbling can be heard high in the mountain, it is not really a storm or an earthquake. It is only Big Bear and the three strong women. They are wrestling and shaking the mountain. They are dancing, and there is no cause to feel afraid.

Jeremy Rubenstein is an educator, producer, and social entrepreneur. He is the Creator of the award winning national touring Box Out Bullying assembly program which over one million students have experienced.
The Legend Of John Henry The Story Of The Pied Piper Of Hamelin – 9 of 52