The Pied Piper of Hamelin
Adapted by Jeremy Rubenstein 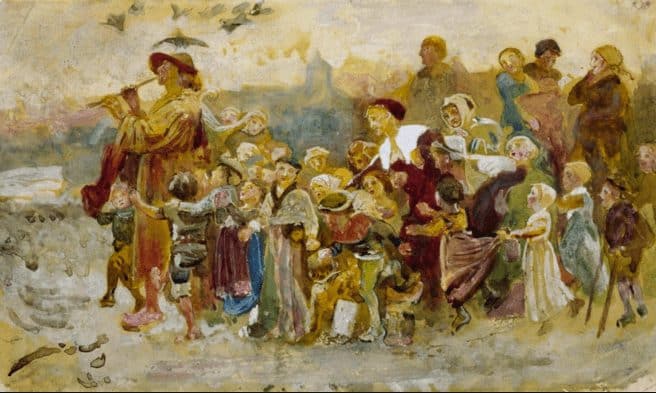 “We must get rid of the rats!” the mayor of Hamelin announced at a town meeting. “If we do not act soon, there will be a plague, and we shall all die.”

“But we have already paid large sums of money to three ratcatchers,” someone said. “Why aren’t they doing their job?”

“They are,” they mayor said. “Yesterday, they caught ten rats.”

“And the day before, we caught fifteen rats,” said a ratcatcher, who was attending the meeting. “But they keep coming! There is very little we can do to stop them. We’re leaving town at sunrise and we’d advise you to do the same.”

The townspeople were shocked and began yelling at the mayor, “Do something! Do something!”

“Quiet!” the mayor said. “There’s no need for panic. Let us sleep on this, and tomorrow we’ll make a decision.”

The next day, the ratcatchers left town, and the mayor met with the other councillors.

“We have three weeks to find someone who can help us,” said the mayor. “Otherwise, we may have to do what the ratcatchers said and leave the town to the rats.”

“Let us send our messengers and offer ten thousand gold coins to anyone who can help us,” said the councillor.

“But we only have a thousand gold coins in the treasury!” said another.

“We must save the town,” declared the first councillor, “and no self-respecting ratcatcher would take the job on for less than ten thousand gold coins. So, if we must lie, we must lie. Let’s put it to a vote.”

Well, the town council voted to offer a reward of ten thousand gold coins to anyone who could rid the town of the rats. That very day messengers were sent out all over Germany and then throughout Europe. After one week passed, the townspeople were disappointed that nobody appeared to help them. Then the second week came and went. And finally, toward the end of the third week, a strange young man was sighted at the edge of the town. He was dressed all in blue and had a cape with stars on it, and his pointed cap was graced by a bright green feather. He camped beneath a large oak tree and played a flute while he cooked a meal over a small fire. As he played his pipe, some rabbits came out of their holes and began to dance around the fire. It was a merry sight, and some farmers who were heading into town saw it and told everyone about the mysterious stranger who could charm rabbits with his magical pipe.

The next day, the piper appeared before the mayor and the town council.

“I’ve come to collect the reward,” the young man said.

“You have, have you?” asked the mayor. “Well, how do you plan to rid our town of rats?”

“That is for me to know, and you to find out,” he declared.

“You’ll receive no money,” the mayor said, “unless you drive the rats out forever.”

“The rats will disappear,” said the piper, “and I shall expect ten thousand gold coins.”

The mayor and the town council promised the piper that he would have his money, and crowds of people formed at the town hall to watch the stranger, who was tall and solemn. He did not smile or nod to anyone, and when he left the town hall, the people backed away from him in fear.

Later that day when the clock struck twelve, the piper appeared at the town square, and this time he was wearing a multi-colored cape that sparkled in the sun. He put his lips to his flute, and the people waited to hear music. But there was nothing to be heard except some high shrill hum, and even the hum could barely be heard as the piper began strolling through the streets. Though the people were still afraid of him, they laughed and said, “He’s more a jokester than a ratcatcher! Someone should fix his pipe! He’s full of hot air!”

All at once, however, the rats started to pour out of the cellars of the houses and out of all the nooks and crannies of the buildings. Wherever the piper strolled, the rats followed him as if in a trance, down this street, into that alley, over the hill, and through a boulevard. Hundreds of rats, all sizes and all colors, marched behind the piper until he had gone through the entire town twice as if to make sure that all the rats were with him.

The people were stunned. They watched the piper lead the rats down to the river. When he arrived at a dock, he stood aside and kept playing as the rats plunged into the dark water and drowned. Thousands of big, ugly monstrous, disgusting rats dove into the water and drowned.

It was sundown when the piper went to the town hall and demanded his reward.

“Here it is,” the mayor said, and he handed the piper a bag of gold coins.

The piper looked inside and remarked, “But there can’t be more than one thousand coins here.”

“That’s the reward,” said the mayor. “That’s what we promised.”

“Lying? Am I lying?” the mayor turned to the other councillors.

“You’re all lying!” the piper said angrily, “and if I do not have the ten thousand gold coins by tomorrow at sunrise, you will lose the most valuable treasure of your town!”

The piper turned briskly and left the town hall. He did not even bother to take the bag of gold coins.

“Don’t worry,” said the mayor. “There’s nothing he can do to harm us!”

“And he even left the money, which we certainly can use,” said one of the councilmen.

“He’ll make a laughing stock out of himself,” said another.

When the sun rose the next morning, the pied piper stood in the middle of the square. He appeared to be waiting for the mayor and the councillors, but they did not dare to go outside. Everyone hid inside and watched him from their windows, from behind curtains. The piper looked at the sun. He looked all around him. The entire square was empty and silent. Then the piper put his flute to his lips and began playing. Again, nothing could be heard but a strange ripple that went through the air like a startling vibration. A slight breeze crept through the doors and the windows of all the houses, and the breeze resounded in a sweet lull. All of a sudden, all the doors and windows flew open, and the children began to move from their rooms out onto the streets. There were hundreds of children, girls and boys, all the children of the town, and they began to dance toward the town square where the piper kept playing. The people of the town could not budge. It was as though they were paralyzed, and when they tried to scream and warn their children, all they could push from their lungs was air.

The children gathered in the square with smiles on their faces, and when the piper began to move down the street that led out of the town, they followed him, singing and rollicking. They followed him into the country toward Mount Koppen, and then they disappeared.

Later that day, at noon, when the townspeople could move again, they rushed out of the town, but they could not find their children. Nor did they ever hear anything about what had happened to them. Some say that the piper was the devil and sold the children into slavery. Others believe that the piper was an angel and punished the townspeople for their lies. Whatever the truth may be, the children left Hamelin in the hear 1284, a year the people will never forget.

Questions: Why can’t the people in Hamelin get rid of the rats by themselves? Could the Mayor and the town council have saved the children? How did greed and politics interfere with the endeavor to save the city from the rats? How were the children abandoned? Is the Pied Piper evil? What did he do with the children? Was it right for the Mayor to lie? Do politicians ever lie today? When you’re a leader are you responsible for who follows you? Who should you follow? How do you know when to follow someone? Do you know any Pipers? Does a Piper have to be a person (ie, what are things in life that might lure you)? Are there things in real life that kids do that their parents feel powerless to stop?

Jeremy Rubenstein is an educator, producer, and social entrepreneur. He is the Creator of the award winning national touring Box Out Bullying assembly program which over one million students have experienced.
The Story of The Three Strong Women – 8 of 52 Perry County, Indiana