The Legend Of John Henry 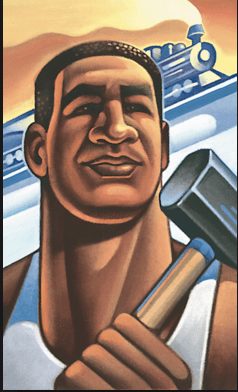 On the very day that President Abraham Lincoln declared there would be no more slavery in America, a strange incident happened on a plantation in Alabama. All the slaves had gathered in front of a small shack because a child was about to be born on the day they were freed. All the animals on the plantation and in the nearby woods also came to watch because they had heard this was going to be a special child. And indeed this child was very special. As soon as he popped out of his mother’s belly, he could walk and talk.

“My son, John Henry, can walk and talk,” the father ran out on the porch and announced the birth of his son.

The father ran back inside and within seconds came back to declare: “John Henry my son has just grown to be three-feet tall!”

The father turned once more and re-entered the shack. Before long, he returned to the crowd, “My son John Henry’s now six-feet tall! We need large clothes. We need more food.”

“Oooooh, ahhhhh! Oooooh, ahhhhh!” the crowd rejoiced, and people ran and fetched clothes and food for John Henry. Even the animals scattered and searched for food.

Well, John Henry would not stop growing until he reached seven feet, and that only took seven days.

His mother sobbed. His father lamented.

“Why must you leave us now?” they asked, and once again all the people and animals gathered in front of the shack.

“I was born a free man, and I’m going to build this land as a free man. You will hear from me,” he said as he hugged his mother and father, “and you will hear about me!”

John Henry headed west to the Mississippi River because he had heard that there was a lot of work on the docks and on the boats. No sooner did he arrive than John Henry found a job loading cotton bales onto the boats. He was so strong and powerful that he could carry five hundred pound bales by himself and load a boat in half the time it took twelve men to do the work.

John Henry loved the life on the Mississippi, and everywhere he went he found a job because nobody could match him in skill and power. In the evenings he used to sit with friends and tell stories and sing songs. One time while he was recalling some adventure in Missouri, he noticed a young woman named Polly Ann glancing at him with her dark brown eyes.

“What are you looking at?” he asked her.

“Because I like you, and you’re gonna be my husband,” she smiled.

Well, Polly Ann was almost as big and strong as John Henry, and she was certainly more beautiful. Nobody ever dared talk to John Henry the way she did, and he liked her spunk, and before you could say jack rabbit, they were married!

So now the two of them traveled the Mississippi and worked together for several years. Then one day, John Henry said, “I’m getting tired of this sort of life. I’ve heard they’re building a railroad back in West Virginia. Why don’t we go there for a change?”

“I’m always ready for a change,” Polly Ann responded, and off they went.

Well, when they got to West Virginia, they went to the C & O Railroad, and there was a man named Captain Johnson, who was hiring hundreds of men to lay tracks for the railroad. Trains were new to the country, and the C & O Railroad wanted to cut across the whole of the United States. John Henry was the perfect man, Captain Johnson said, a hammer man who could drive holes through rocks to make the way for the tracks. And Polly Ann, she worked on the tracks until they discovered she was pregnant and had to stop the hard labor. But she continued to work in the kitchens to feed the hungry men who worked hours and hours in steamy hot weather.

The work was hard and dangerous, and many men died from exhaustion because they had to cut into the wilderness, chop down forests, and burrow through hills.

“We’re gonna bring all the people together,” John Henry said. “we’re gonna connect people all over America with our tracks.”

This is what the workers believed, and most of them were Blacks who had been freed from slavery and wanted to show the world what they could create. Then there came a time when they came to the Big Bend Mountain in West Virginia, and the railroad men decided to build a tunnel right through this mountain.

“We won’t need your work for this mountain,” Captain Johnson declared.

“What?” the workers cried out.

“You’ll have to find some other jobs,” Captain Johnson said. “We’re bringing in a special machine that can work better than all you men.”

“But what about our families?” they responded. “How are we going to feed them? You can’t just lay us off.”

“The machine will save us money and time,” Captain Johnson said.

“But we’re better than any machine!” John Henry shouted.

Just then you could hear “chug-chug-chug, chug-chug-chug,” and a man in a top hat and suit came driving up on a steam machine. It was Chuck Geary, the inventor of a drill machine that he drove up to the mountain and parked in front of all the workers.

“Who said you’re better than my machine?” he shouted.

“I did!” John Henry declared.

“You’re a fool and don’t know what you’re talking about.”

“I’m a man and smarter and stronger than any machine you can make.”

“Hold on, now,” Captain Johnson intervened. “I don’t want no fights on this here territory. I’ve got a job to do. A tunnel to be built.”

“That’s what I’m here to do,” Chuck Geary declared. “You want a tunnel. Well, I can get through this mountain in one day’s time.”

“And I can do it faster,” John Henry said. “And if all the men worked with me, we could do it in half a day.”

“Nobody calls me liar and gets away with it,” John Henry was mad.

“We’ll see what the truth is,” Captain Johnson. “Let’s have a contest. Tomorrow at eight in the morning John Henry will face the machine to see who can dig a tunnel through Big Bend Mountain the fastest. If John Henry wins, you men will keep your jobs. If not, I’ll buy the machine from Chuck Geary.”

Well, word spread quickly about the context between John Henry and the machine. The next day at sunrise there were thousands of people gathered before Big Bend Mountain. John Henry stood proud and tall with steel hammers in each one of his hands. Chuck Geary sat on his shiny steam machine with power drivers set to pound the mountain. Captain Johnson had a flag raised high, and as soon as it turned eight o’clock, he cried out, “Ready, set, go!” The flag went down, and “wham!” John Henry whacked the mountain with his hammers, and “wham!” the machine cracked open the mountain.

“Bam! Bam! Bam!” John Henry’s arms were power drills, and he began drilling through the mountain. The crowd cheered as he got a head start on the machine.

“Bam, bam, bam! Bam, bam, bam!” John Henry kept at it until midday when he came back out of his tunnel to rest for several minutes.

“He’s getting ahead of you, John Henry,” the people cried.

“Don’t worry. I still have the lead!” he responded.

“Not for long,” Chuck Geary yelled.

“I better go back into my tunnel,” John Henry said.

But John Henry kept pounding ahead way into the afternoon. “Bam, bam, bam!”

In the meantime, the thousands of people went around the mountain and gathered at the other end to see who would be the first to emerge. The sounds were terrifying.

All of a sudden, the people could see a crack in the mountain. The crack widened, and dirt and rocks began to fall as a hole appeared, and out jumped John Henry. The people roared and danced and sang.

But then there was silence. Nobody could hear the machine anymore. John Henry looked worried.

Quickly, John Henry began pounding the mountain where Chuck Geary had been expected to make his entrance. He slammed and whacked the side of the mountain and began making another tunnel. Inside he went and drove onward until he came to poor Chuck Geary who was lying on his machine. He had fainted when the machine had broken down. So John Henry picked him up and carried him out of the mountain.

But just as John Henry placed Chuck Geary on the ground, he gasped and held his heart. Then he toppled over, fell to the ground, and lay there dead.

Polly Ann came rushing over to her man, John Henry. Tears filled her eyes. She could not stop sobbing. There was silence. Then Polly Ann stood up and managed a smile.

“It’s no time to be sad,” she said. “John Henry died for you, and now it’s time for you to be glad that you have your jobs and your families. Just do me a favor and never forget my man John Henry. That’s all I ask.”

And Polly Ann tapped her belly and added, “My baby won’t forget either, and the future will be ours.”

John Henry was a railroad man,

He worked from six ‘till five,

“Raise ‘em up bullies and let ‘em drop down,

I’ll beat you to the bottom or die.

“You are nothing but a common man

Before that steam drill shall beat me down,

I’ll die with my hammer in my hand.

Jeremy Rubenstein is an educator, producer, and social entrepreneur. He is the Creator of the award winning national touring Box Out Bullying assembly program which over one million students have experienced.
The Story Of The Father And The Baby Birds – 6 of 52 The Story of The Three Strong Women – 8 of 52