Jeremy Rubenstein In Your Area, Pennsylvania 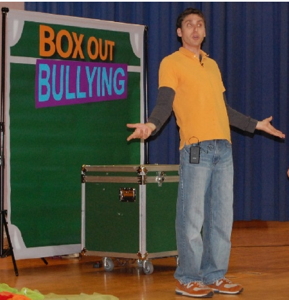 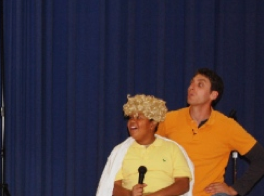 At any school, a special assembly that breaks up the school day is always a pleasant break from routine. Valley View Intermediate School is no exception.
But recently the students there got some serious food for thought, thanks to the gentle guidance and wacky antics of actors Jeremy Rubenstein and Helen Breyman of Lancaster-based Box Out Productions. The topic: bullying, its causes, its effects and how it can be stopped.
Rubenstein and Breyman’s performance, sponsored by the school’s parent-teacher organization, kept the youngsters attention and kept them laughing with pratfalls one minute and thoughtful discussion the next.
“We heard about them when another school in the area brought them in,” explained Cindy Iyoob, the PTA’s health and safety chairperson. “We heard that the kids just loved it, because they use comedy, and they try to get the kids thinking about why kids bully in the first place, as well as how to get them to stop it. It’s not just a state trooper saying: ‘Don’t do it.’ ”
Rubenstein, who also wrote the piece, is an experienced actor who also has psychology training. He says he was moved to create the show after a tragedy in his hometown.
“I heard about a sixth-grade girl who was being bullied who committed suicide,” he said. “It really affected me and I asked myself what I could do to prevent that kind of thing from happening again. That’s when I got started working on this.”
He has performed the show at dozens of schools in several states.
“He’s very dedicated to stop bullying in our schools across the country,” Iyoob said. “We are very lucky to have them come to our school and present this very important, and life-saving, information.”

Jeremy Rubenstein is an educator, producer, and social entrepreneur. He is the Creator of the award winning national touring Box Out Bullying assembly program which over one million students have experienced.
With Fun & Games, Kids Learn Anti-bullying Skills Box Out Bullying kicks-off Wilson Elementary’s Olweus Bullying Prevention Program