Jeremy Rubenstein In Your Area, National

Duo works to ‘box out bullying’

A locked trunk sat mid-stage throughout their show, and contained the answer to the problem. Much of their performance was focused on how to get into the box. When they finally did, the answer was simple.

The single word was written on a slip of paper, the only item inside. 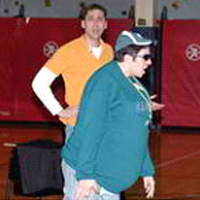 Three performances were offered at William Tell, with more given the day before at Perry Central and scheduled for Friday at Tell City Junior-Senior High School.

Rubenstein, president of Box Out Productions, with offices in New York City and Lancaster, Penn., said the shows were the company’s Indiana debut. The presentations draw from the research-based instruction of the Olweus Anti-Bullying Program, which the local schools have been using for several years.

“It goes along exactly with our Olweus Program, the four bullying rules, and all of that,” school counselor Sally Wolfe said as the performers were putting away their props.

Rubenstein said before a 1:30 p.m. show began Thursday the presentations are viewed by 100,000 students each school year. They were scheduled to conduct a workshop for parents later in the day, he added.

“It’s very important to give a comprehensive message,” he told the News, “to make sure that everybody – parents and faculty and students – are all on the same page. We give them a common language on how they can work together.”

One of the most important ideas the entertainers delivered to students who have suffered under the tyranny of bullies was “you guys are definitely not alone.”

“Over 160,000 students in America skip school every day because of fear,” Rubenstein told the students. “And I don’t blame them. On average, one out of every three of you will get bullied once a week. And by the 10th grade, four out of every five of you will be picked on or watch somebody else get picked on.” Millions of students in America have either been bullied or forced to do things they didn’t want to do, he added, “and most of them don’t tell anybody.”

The four rules advocated by Olweus to stop bullying are:

During their presentation, Rubenstein and Palmieri pointed out the difference between telling someone about a problem and tattling on someone.

“You tell to protect someone,” Palmieri explained. “It would be telling if I tried to get someone out of trouble. Tattle-telling is just when you’re trying to get someone in trouble. You’re making trouble for them.” 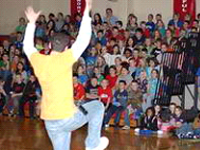 The company provides evaluations before and after their presentations using online, 20-question surveys that can be completed in less than five minutes, he said, to determine things like where bullying occurs to work toward scientifically and statistically based changes.

More information can be obtained from their Web site, boxoutbullying.com.

Jeremy Rubenstein is an educator, producer, and social entrepreneur. He is the Creator of the award winning national touring Box Out Bullying assembly program which over one million students have experienced.
North Wales Elementary School Holds Bullying Prevention Program Kick-Off Saltsburg Students Are Challenged to “Box Out Bullying”