Abbey Lane Students Learn How to Box Out Bullying 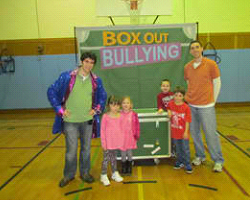 Students at Abbey Lane Elementary School are pictured with hosts Tom and Jerry after the show Box Out Bullying.

during an Arts In Education assembly called “Box Out Bullying.” Hosts Tom and Jerry entertained the students with costume changes and their fruitless attempts to open a large box. The box would not open until the hosts were sure that the students were educated on how to box out bullying.

“It is not your fault if you are being bullied,” the hosts of the program stated.” The hosts also told the students that there are four rules to stop bullying:
1. Be a teller not a tattletale to protect someone being bullied.
2. Do not pick on others.
3. Have empathy toward others
4. Try to include students who are being left out.

Jeremy Rubenstein is an educator, producer, and social entrepreneur. He is the Creator of the award winning national touring Box Out Bullying assembly program which over one million students have experienced.
PTA Brings Anti-Bullying Programs to Elementary Schools “Box Out Bullying” Tours Intermediate & Elementary Buildings at Valley View School District