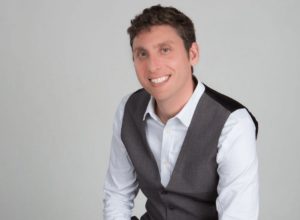 Jeremy is a leading expert in combining research based bullying prevention techniques with interactive live theater.

He has performed at The White House, presented at the United Nations, and published on the topics of arts-education, bystander empowerment, and creating empathy among students.  And he appeared on the TV Game show Cash Cab!.

Jeremy graduated from The Pennsylvania State University with degrees in Theater, History, and Journalism. He holds his Masters in Arts Education from Long Island University, and holds a Certificate in Eccentric Performance from The Celebration Barn Theatre studying under Avner Eisenberg,

After starring in national tours, feature films, regional theater productions, and off-Broadway shows, Jeremy felt a sense of accomplishment.  He made it as a working actor.  A journey he started at 14 years old, honing his craft performing at his local equity theatre during summers and various community theatre productions in high school.  So he decided to pursue a career in education, his second passion.

Jeremy spent six years teaching and loved it.  He was a natural in creating a classroom that was fun, joyful, and safe.  And his fellow teachers noticed.  But at national conferences, when educators told him about bullying in their schools Jeremy found a common theme. Students were experiencing a crisis in compassion.

Jeremy knew what to do.  Educators are smart, but sometimes they are boring!  So he wanted to write a show that made learning fun.  To help with the script, he reached out to the best social emotional learning practitioners.  Then to add production value, he brought on the best electricians and set designers.  Finally, Jeremy relied on his artistic background using interactive  theatre to engage audiences by seeing, listening, and doing.

In November of 2008, Jeremy debut his first production.  Since then, over 1.3 million people have experiences his live theater shows, artist-in-residencies, workshops, and keynotes.  What started out as a personal mission has turned into a movement. Bullying has now been recognized as the societal issue that Jeremy always saw it as.

Now, more than ever, when educators, proactive parents, and other concerned community members come to Jeremy for help, he brings the data, the product, and the proven track record of success in improving their school social dynamics and communities and a whole.